QUBER:  Save money and have some fun too! 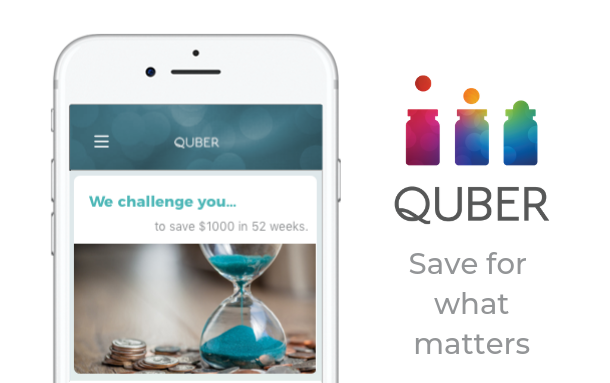 QUBER:  Save money and have some fun too!

Budgeting, spreadsheets, and charts – certainly not most people’s favourite topics. And though saving money is a necessary part of almost everyone’s life, it’s usually regarded with about as much enthusiasm as filing taxes or washing the dishes.

Moncton-based QUBER aims to change all that. The company’s smartphone app helps users save money for personalized financial goals, like a vacation, buying a home, or even just a new pair of shoes. What makes QUBER different from other apps is the way they encourage saving – they’ve turned it into a game with many fun challenges and contests that motivate users of QUBER app to save money.

QUBER has attracted a lot of interest since they launched in 2018 both in Canada and internationally. A visit to the company’s website shows extensive media coverage of the app. And it’s not all talk – the company already has thousands of users, five employees, and notable revenue growth.

We’re so impressed with QUBER that we recently announced our second investment valued at $200,000 into the company, which is part of an overall round of $450k which includes a number of angel investors and the company founders themselves.

“QUBER has a fun, innovative approach to a universal concern – saving money,” says Thomas Bird, our Investment Associate. “They’ve managed to grow their team, increase their revenue, and attract a significant number of customers in just, more than a year, since QUBER was launched in Canada.”

Money saved through the app goes into the QUBER Vault, where it is protected from impulse spending and readily available when users want to access it. Similar to online bill payments, users provide their bank account number, and the app securely transfers money to personalized “savings jars” with automatic “savings rules”, allowing users to determine how they would like to save money. The app is also able to combine information from diverse sources like financial institutions, social media, in-app user goals, and demographic data to provide relevant actions to help users achieve their financial goals.

Led by CEO Jen Leger, QUBER was founded in 2016 and joined our portfolio just one year later with an initial investment of $200,000. We’re confident in Jen’s ability to lead the company to success; she’s built her career in tech and start-up environments, having previously served in senior roles at BMM Testlabs, Medavie Blue Cross, and Spielo, among other companies. It’s the reason we chose to invest for the second time.

QUBER’s growth is a boon in particular for recent graduates. They’re a natural fit for roles at such an innovative start-up – one that adds to our province’s growing expertise in the FinTech industry.

“Budgeting and saving is something that’s important for nearly everyone, regardless of age or financial status,” says Jen Leger, QUBER’s CEO. “Our app takes something that’s usually considered boring and unappealing and makes it easy, fun, and rewarding.”

QUBER has ambitious plans for the next year. They’re looking to add three new team members, secure 25,000 users, and substantially increase their sales. We’re pleased to lend a hand through our investment to help this exciting company grow.