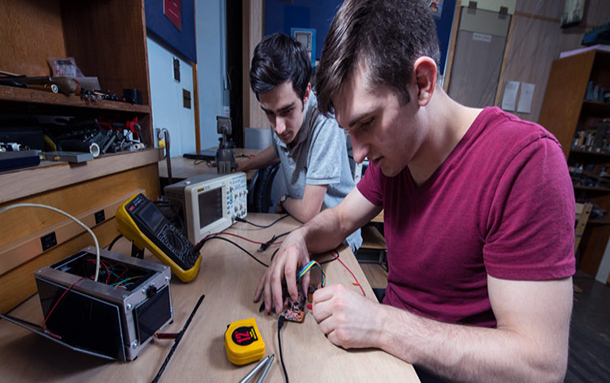 Move over satellites as big as buses that cost hundreds of millions of dollars to construct – there’s a new player in the game. And it’s just a little bigger than a carton of milk.

Cube satellites, or CubeSats, are miniature satellites that are cheaper, smaller, smarter and faster to build than older satellite models. Since the first CubeSat was launched in 2003, over 500 of these “nano satellites” have been sent into space by teams from 50 different countries. And now a group of researchers from the University of New Brunswick, Université de Moncton and NBCC is joining the club.

Led by Co-Principal Investigators Dr. Brent Peterson and Troy Lavigne from UNB, the CubeSat NB team was recently selected by the Canadian Space Agency to be one of only fifteen teams nationwide to be funded by the Canadian CubeSat Project. We caught up with Dr. William Ward, Dr. Richard Langley and Troy Lavigne to ask them a few questions about their remarkable project and what it means for this province. We’ve also included a few words from Dr. Laura Richard, the NBIF’s Director of Research, about her views on potential commercial applications for CubeSat NB’s research right here in New Brunswick.

The answers below were lightly edited for clarity and conciseness.

What are you hoping to learn with the construction and launch of this satellite?

Our CubeSat will have two payloads with one mission: the study of space weather.

The first payload will carry a global navigation satellite systems (GNSS) receiver that is designed to record raw observations of GNSS radio signals transiting the ionosphere. Dr. Langley from UNB is leading the team working on that part of the project.

The second payload features a spectral imager that will observe atomic oxygen airglow and auroral emissions in the mesosphere/lower thermosphere. The imager will gather data about red (at a wavelength of 630 nanometers) and green (at 557.7 nanometers) varieties of these phenomena. This work is being undertaken by a team led by UNB’s Dr. Ward, and its purpose is to study the structure and dynamics of these emissions along with their variability in response to space weather.

You mentioned the ionosphere and “space weather” in your last answer – for anyone whose understanding of space is a bit rusty, what is special about the ionosphere?

The ionosphere is aptly named, as it contains a high concentration of ions and free electrons, which are distributed throughout the ionosphere in complicated patterns. Those patterns are caused by solar radiation, the Earth’s magnetic field, and the Earth’s rotation.

And how does activity within the ionosphere affect our systems here on earth?

The interaction between the sun, the geomagnetic field, and the ionosphere leads to a variety of effects collectively known as “space weather”, akin to the weather we experience in the lower atmosphere (a.k.a. here on earth!)

Space weather can include significant perturbations of the geomagnetic field, which extend to the Earth’s surface and can induce currents in electrical cables and power transformers. These currents can result in equipment damage, or cause protection circuitry to “trip” and disconnect transformers from the electrical grid.

How can the data from this mission be used to help people down here on earth?

CubeSats are a newly emergent, cheap technology alternative to the large and expensive satellite missions currently being used by countries around the world. With regard to our current mission, including the data we gather and the subsequent research that results from that data, we hope to further our understanding of the ionosphere and space weather.

It may be possible to eventually launch a “swarm” of cube satellites for the purpose of measuring and predicting space weather, similar to how satellites are currently used to gather data for weather forecasting. That information would prove valuable to a host of industries, including generators and distributors of electricity.

What are some of the potential benefits New Brunswick could see from this project?

Our primary goal at CubeSat NB is to train students in space technology, which creates the “seed” potential for a future space industry in New Brunswick. We expect this mission to provide the foundation for future CubeSat development in a broad range of applications, including remote sensing, astronomy, conventional weather and space weather.

How has the NBIF team helped you achieve your goals (funding and otherwise)?

Funding from NBIF frees us up to focus on the space mission itself, instead of spending a large portion of our collective time scrambling to secure funding or even being forced to scale back our mission.

The majority of our funding directly supports CubeSat NB graduate students at UNB and Université de Moncton. Without assistance from graduate students in a range of disciplines, our mission goals would not be achievable. NBIF is also supporting the construction of an S-band ground station in New Brunswick, which will permit high data rate downloads from our CubeSat to Earth. This is particularly important – with our two payloads, we will have a lot of data.

We’re going to end with a quick word from Dr. Laura Richard on how CubeSat research could impact educational and commercial opportunities in New Brunswick.

On the outset, it may seem like the CubeSat project is not particularly relevant to the NBIF’s mandate; however, we anticipate this work will have a marked impact on our economy in several ways:

1.More than 60 students are involved in this project, and the extensive student training involved will help create and foster a skilled labour pool here in the growing field of aerospace technology.

2.The GNSS and imaging data can be sold to power companies and utilities, helping them to predict and understand space weather and therefore reduce downtime.

3.Students from the UNB Technology Management and Enterpreneurship masters program will be afforded opportunities to explore avenues for commercializing the new technologies developed by CubeSat NB, including possibly selling them via new start-up companies.

We are therefore proud to support the CubeSat mission and look forward to seeing a little piece of New Brunswickian innovation being launched into space!