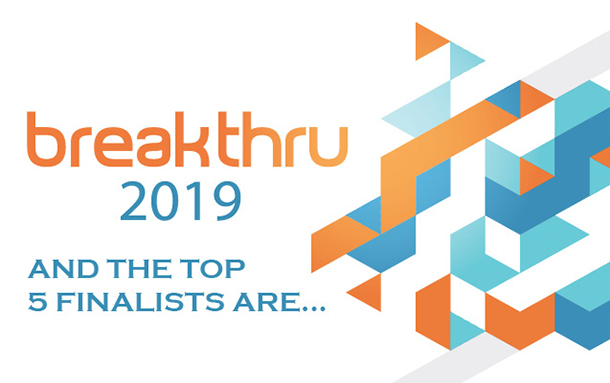 After several months of friendly but intense competition, the NBIF is pleased to announce the five teams that have been selected as finalists in its 2018-2019 Breakthru entrepreneurship competition. The five teams chosen will compete for Grand Prize, Second Place and the CBC Viewers Choice awards, with prizes ranging from cash investments by the NBIF and ONB to professional services from contributing sponsors like Deloitte, Cox & Palmer, Symplicity Designs, Momentum, Bonfire Communications and Amy Parrill.

The five finalists that will be competing against one another for top honours are as follows:

The NBIF team had their hands full this year, as they received 36 business plan submissions by the initial deadline in November. After two ‘entrepreneurship bootcamps’ that offered teams advice, mentoring and support from successful founders and operators of local and national businesses, the submissions were whittled down to 10 in February and further to the current crop of five finalists earlier this month.

“The teams that have made it this far in the competition have been successful in proving that they are solving real problems and demonstrating customer traction for their ideas through Letters of Intent,” said Daniel Hoyles, an investment analyst at the NBIF. “[Awards dinner attendees] can look forward to five promising ideas that have the opportunity to make a real impact on their industries and on our lives.”

Each team will have the opportunity to pitch to a selection panel of judges on March 14th, and winners will be announced a week later at the awards dinner at the Fredericton Convention Centre.

For many of the finalists, the Breakthru competition is their first foray into competitive entrepreneurship, and it’s been an exceptional experience for all of them. “I’d say the biggest thing we’ve learned is how strong the support network is in New Brunswick when it comes to starting a business,” said Kyle Woods of Canum Nanomaterials. “All of our advisors and mentors have had a tremendous impact on us, and working with them has been a real game changer.”

Want to attend the awards dinner on March 21st! You can purchase tickets on Eventbrite for $100 + tax for an individual ticket, and $750 + tax for a table of 8. Table tickets can also be purchased directly from the NBIF by contacting Joanne Johnson at joanne.johnson@nbif.ca or 506-452-2884. We can’t wait, and we hope to see you there!