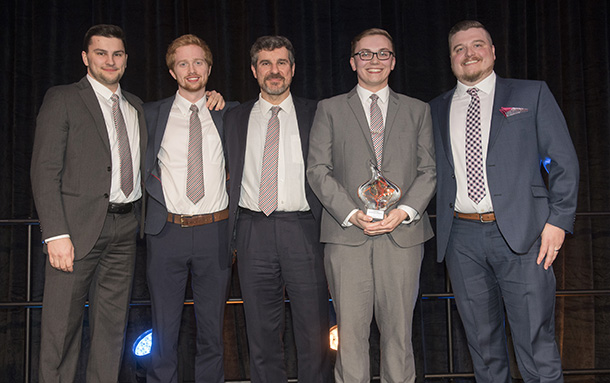 After almost half a year of fantastic companies battling it out for prizes and glory, NBIF has crowned the next Breakthru champion!

The competition came to a triumphant end on Thursday evening at the Fredericton Convention Centre, with Canum Nanomaterials taking the top prize and RIDDL finishing in second place. Canum also won the CBC Viewer’s Choice Award for receiving the most votes on CBC New Brunswick’s Facebook page.

The winning team of Canum Nanomaterials, led by President and CEO Kyle Woods, COO Alex Clarkin, CTO Francois Michaud and Director of Research Dr. Felipe Chibante, is a carbon nanomaterials manufacturing company that produces high-quality fullerenes for use by manufacturers and researchers.

Fullerenes are carbon allotropes that can be used in a wide variety of applications, including as antioxidants, antiviral solutions, solar cell components, hydrophobic drug deliverers and photosensitizers. Spun out of Dr. Chibante’s innovative research at the University of New Brunswick, Canum’s unique product processes allow for the affordable and environmentally friendly manufacture of these complex and versatile molecules.

The runner-up team at RIDDL developed a cloud-based software platform that harnesses the power of advanced machine learning to provide investment managers and donors with actionable data about how they can use their investments to effect change in fields like climate change mitigation and poverty reduction. Founded by Janelle Sobey, Vanessa Paesani and Jess Peters, RIDDL’s pragmatic solution to this real-world problem is an important contribution to the corporate social responsibility movement.

“From the initial batch of 34 startups that began the competition through our semi-finalists and finalists, we were consistently impressed with the quality of the ideas coming from this province’s entrepreneurs,” said Jeff White, NBIF’s CEO. “New Brunswick always punches above its weight. From virtual reality to bioscience to neural networks, New Brunswick researchers and startups are at the forefront of some of the world’s most promising industries. We’re thrilled to offer them a platform and support network through the Breakthru competition.”

Those sentiments extend to the rest of us here at the NBIF team, too. This is the end of a very special time for us – we think that Breakthru gives participants a unique opportunity to access start-up capital, mentoring, and support from industry leaders and other successful entrepreneurs, and we’re proud to provide those opportunities to New Brunswickers every two years.

Congratulations to Canum Nanomaterials and RIDDL, and we’ll see you for Breakthru 2020-21!