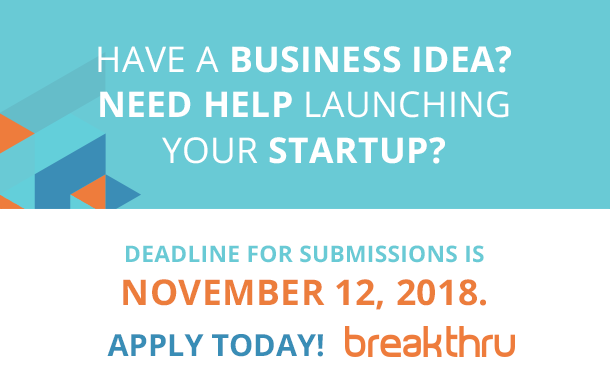 At NBIF, we think it takes the efforts of an entire community to create a true culture of innovation.

There is no doubt that New Brunswick’s growth strategy relies heavily on generating innovation, but is it possible to just snap your fingers and make it happen? Probably not. Without active collaboration between participants from the worlds of business, academia, and government, conceiving and supporting new ideas will always be an uphill battle.

That’s one of the problems we’ve tried to solve by creating our Breakthru competition, which is being held again in 2018/19. The biennial competition provides entrepreneurial New Brunswickers with the chance to compete for access to start-up capital, mentoring and support from successful founders and companies in the province.

“The goal for Breakthru 2018/2019 is to find aspiring New Brunswick entrepreneurs with an idea for a business and surround them with support provided by NBIF and our great sponsors, that allows them to take that idea and turn it into a business full of potential,” says Raymond Fitzpatrick, Director of Investments for NBIF. “This is a business plan competition, but the two ‘bootcamps’ will cover everything from business planning to legal, accounting, sales, and pitching that are necessary skills for anyone looking to start a business.”

To start, competition hopefuls must apply with an executive summary of their business idea or concept. Applicants can submit a solo proposal or apply as part of a team – the full eligibility guidelines can be found in Breakthru’s 2019 participant handbook. This application window is open from September 12th until November 12th, after which selected participants will attend the first of the aforementioned ‘bootcamps’ focused on business fundamentals and idea refinement.

These bootcamps are consistently identified as a valuable part of the process by participants. Those who make the cut in 2019 can expect presentations and hands-on workshops from industry leaders like Cox and Palmer, Deloitte, and Alongside.

After the first bootcamp, participants will go back to the drawing board and put together a completed draft of their business plan by January 10th. A group of ten semi-finalists will be chosen by our judges by the end of January, and will participate in a second ‘bootcamp’ focused on pitching and 1 on 1 meetings with community stakeholders and NBIF staff.

After the second bootcamp, participants are given one more chance to edit their business plans before the field is pared down to five by the NBIF Investment Team in March. That’s when the fun really begins! Finalists pitch to the selection committee on March 14th, and the winners are chosen and then announced at the Breakthru LIVE Awards Dinner on March 21st.

Prizes, including both investments and professional services, are provided by NBIF and are as follows:

Past finalists and winners include successful companies like Pfera and SomaDetect.

NBIF encourages anyone with an idea they just can’t get out of their heads to apply for the Breakthru competition. New Brunswick’s innovation ecosystem is growing every year – who knows, maybe your idea will be the one taking home the gold in 2019!