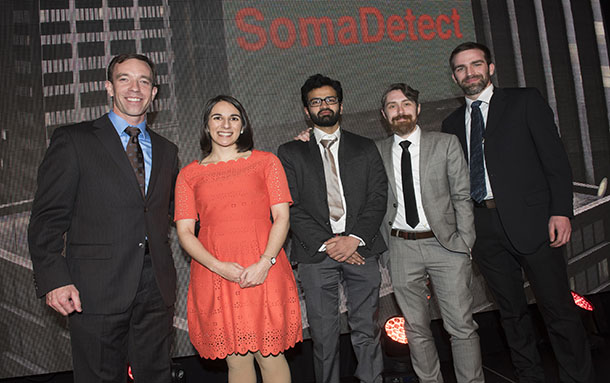 Her father, an inventor, was working with a diagnostic tool he had developed, which uses light-scattering technology to provide information about blood samples. He made it a practice to use milk to calibrate the machine, so he wouldn’t waste a valuable blood sample. One day he noticed that depending on the kind of milk he used – 2%, coffee cream, skim – his device would provide a different result.

“A little investigation revealed that the variations were based on the fat content of the milk,” says Deshpande. “Dad shared the results with local farmers, and began looking into other variables that mattered to the dairy industry.”

When it became clear that he was really onto something, Deshpande Sr. filed a patent and asked his daughter – a PhD in biology with more than a decade of experience working on data-management systems for large-scale websites – to take on the commercialization of the product. She and husband Nicholas Clermont co-founded SomaDetect in the Summer of 2016.

“Measuring fat content is critical, because farmers are paid by fat content.,” explains Deshpande. “Measuring somatic cells is also really important, because they indicate an immune response in the cow. The higher the count, the more ill the cow – and a sick cow produces less milk, of lower quality. These two variables really go hand in hand.”

Deshpande is currently working with product engineers to move SomaDetect out of the prototyping phase and into a pilot phase, where the technology would be deployed as an in-line system.

“We certainly have more development that needs to be done, but we’re really excited about the potential. An in-line system will provide critical information to improve farming practices, without making more chores for the farmer,” she says. “It will happen right in the milking line, which will allow farmers to receive information from every cow at every milking.”

The information will collect in a database, where the software will analyze it for trends, using machine learning to alert the farmer when treatment is necessary, and when it isn’t – saving on costly antibiotics.

“We will send the farmer an alert as soon as we see a problem developing,” says Deshpande. “This will mean low-quality milk won’t enter the collection tank, and it will also mean earlier treatment for cows suffering from common infections like Mastitis.”

Deshpande explains that the inability to catch infections early enough for effective treatment is the number one cause of early death for dairy cows.

“SomaDetect will help farmers improve milk quality and herd health,” she says. “The farmers I’ve spoken to are excited about the potential benefits for their businesses.”

Deshpande is a participant in B4Change, the Social Venture Accelerator at the Pond Deshpande Centre (no relation) at the University of New Brunswick in Fredericton.

“B4C connected us with so many people who have supported us in so many ways,” she says. “It was through B4C that we first learned about Breakthru.”

Deshpande was notified on March 1st that SomaDetect was one of five provincial finalists in the New Brunswick Innovation Foundation’s Breakthru start-up competition. At the Breakthru LIVE Awards Dinner on March 23, she could take home nearly $400,000 in prizes running from cash investments to in-kind donations of professional services.

“When we found out we were a finalist, I couldn’t believe it,” says Deshpande. “The entire process has been fantastic.”

She goes on to say that the other Breakthru finalists don’t feel like competition, they feel like friends. She describes the group as a community.

“If we’re lucky enough to win on the 23rd, we’ll be able to jump-start development, hire staff, and get moving toward piloting the system at real farms,” she says. “We’d probably get an office, too. We don’t have one of those yet.”