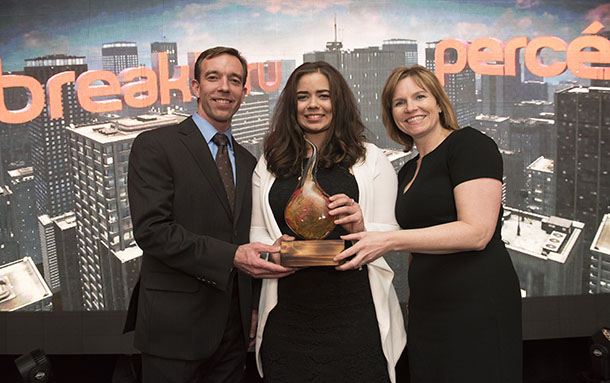 Lisa Pfister loves horses. She’s even breeding her mare, who is expected to foal sometime this Spring.

“The gestation period for a horse is between 320 and 370 days. That 50-day window creates a lot of uncertainty as to when the foal will arrive,” says Pfister.

Owners and veterinarians engage in an expensive and exhausting process called Foal Watch, staying up around the clock to monitor the mare.

“When a mare starts the birthing process, it’s fast. It only lasts 20-30 minutes,” explains Pfister. “If something goes wrong, it happens quickly, so you need to be there.”

Pfister is working on a Masters of Technology, Management and Entrepreneurship at the University of New Brunswick.

“The program’s requirements include starting a business,” says Pfister. “I knew I wanted work in reproductive biotechnology for the equine industry, so I focused my research on ways to improve breeding practices for breeders and for vets.”

Pfister’s work has resulted in two software products. The first is an Equine Breeding Management tool she describes as an electronic health record for horses.

“It will allow large-scale farms and breeders to evaluate the health of their breed stock, and keep track of vaccinations and other health interventions,” she says.

The second product is a birth prediction tool that takes an established technique – milk strip testing –  to the next level.

“People have been doing milk strip testing for a while. They dip a test strip into a sample of the mare’s milk, and interpret it visually against a colour chart,” says Pfister.

It sounds straightforward, but as Pfister explains, everyone sees colour differently, and results can vary from breed to breed.

“I have developed a hand-held tool that takes the milk strip and does an optical analysis,” says Pfister. “Then the software runs a predictive algorithm to establish the approximate foaling time.”

Pfister has received a provisional patent for her Birth Predictor process, and has already seen some exciting results.

Standard milk strip testing can close the 50-day foaling window to 2 to 5 days. Using her system, that window shrinks dramatically, to 12-24 hours.

These early results have generated a great deal of interest in the equine community.

“With each publication, I’m getting more inquiries,” she says. “I won a student research poster contest at a conference in England, and that created quite a bit of attention in the European industry.”

To put that interest in perspective, in Canada alone, the equine industry is worth $20 Billion.

Pfister’s short-term plans include beta testing the device this Spring and Summer, working with three farms and eleven mares, including her own. She’s also going to ramp up pre-sales for a 2018 launch.

Pfister was encouraged to apply for the New Brunswick Innovation Foundation’s Breakthru start-up competition by one of her professors.

Pfister was notified on March 1st that Pfera was one of five provincial finalists. At the Breakthru LIVE Awards Dinner on March 23, she could take home nearly $400,000 in prizes running from cash investments to in-kind donations of professional services.

“When I found out I was a finalist, I was surprised, because I wasn’t sure there would be this level of interest in what I was doing – it’s pretty niche,” says Pfister. “The fact that people care about this is humbling.”

Pfister says she’s currently limited in what she can do because she’s a one-woman show.

“If I’m the winner, it will give me the funds to staff up, and add more farms to the pilot project. A win will allow me to kick it into high gear.”