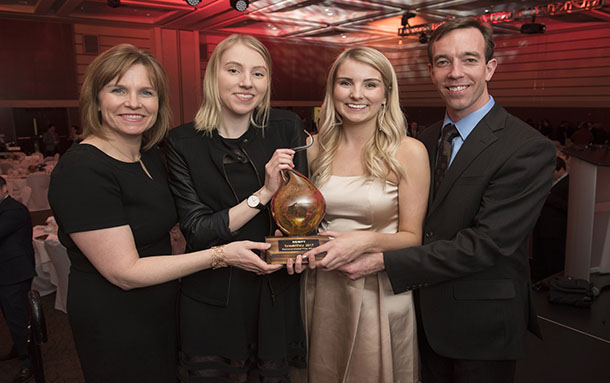 It was in her third year of studies at the University of Prince Edward Island that Erin O’Halloran knew she wanted to start a business.

“I started writing down an idea per day,” says O’Halloran. “They were mostly thoughts on making existing things better or more fun. I had 70 ideas down on paper before I landed on Newpy.”

O’Halloran noticed most of the user-created product photos she saw on social media weren’t great quality. She recognized that as a missed marketing opportunity for the brand.

“Then I received a package in the mail,” she says. “I had that moment of excitement before opening it, and I thought – what if we combined the two? What if we capitalized on that feeling of excitement, and added a branded digital package to the photo upload?”

O’Halloran explains that social media is trending toward making posts more engaging, and she knew her idea would take traditional photo posts to the next level.

“My sister is a talented graphic designer, so I shared the idea with her early on,” says O’Halloran. “She thought it was a home run, and we started working on a minimum viable product right away.”

Here’s how it works: a social media user buys a product and takes a photo of it. Instead of sharing it on their social channel as-is, they upload it to the Newpy app, where they can choose a package to put it in.

“Packages can simply be a nice design, or they can be custom-branded by one of our retailer partners,” says O’Halloran.

The system associates the package and the user photo, and then publishes the package on the Newpy newsfeed. Users can then share their package onto their own social channels. A simple click on the package, and the photo is revealed.

“Newpy is free for end users. Our customers will be our partner companies – retailers that set up custom-branded packages in the Newpy system,” says O’Halloran. “Online retail is a huge market, with more than 85,000 businesses in Canada and more than a million in the US, the potential is enormous.”

“We are three months in, and we’re just launching our beta trial,” says O’Halloran. “We’ve got three retailers signed on already.”

Short term, O’Halloran says her plan is to build their user-base, and create the Newpy community. She’ll do that by running city-based Newpy contests rewarding photo uploads with a chance to win a gift certificate for a partner retailer.

“We’ve applied for a variety of grants and loans,” says O’Halloran. “We started working with the New Brunswick Innovation Foundation, and they suggested we apply for the Breakthru competition.”

2016 marks the first year the New Brunswick Innovation Foundation’s Breakthru start-up competition has accepted participants based outside of New Brunswick.

“The entire Breakthru process has been amazing,” says O’Halloran. “The bootcamps were great, and the atmosphere was anything but competitive. Everyone gave each other pointers and advice. We loved it.”

O’Halloran was notified on March 1st that Newpy was one of two national finalists in the competition. At the Breakthru LIVE Awards Dinner on March 23, she could take home more than $300,000 in prizes running from cash investments to in-kind donations of professional services.

“When we found out we were a finalist, we were so excited,” says O’Halloran. “It was unexpected!”

O’Halloran says she and her sister are going to see where Newpy takes them whether they win on the 23rd or not.

“If we win, we’ll be able to make Newpy our full-time job. We’ll accelerate our launch, and add an app developer to the team,” she says. “It will change everything for us.”