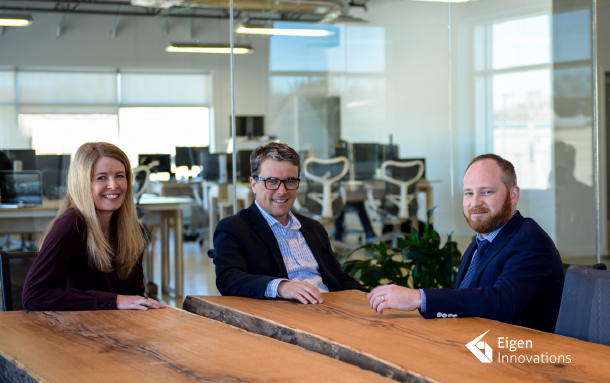 Fredericton-based Eigen Innovations is proof that New Brunswick’s start-ups have what it takes to compete in the global marketplace.

Eigen specializes in helping manufacturers become more efficient – and that’s a big deal. Production lines today are incredibly complex. The machines involved create a lot of data, but most companies are not able to use this information. That’s where Eigen comes in. Their technology monitors and analyzes existing production data to help companies waste less, make more and adapt faster.

Lower costs and better-quality sound like a winning combination to us – that’s why we’re now investing $250,000 in the company, which is part of an overall round of over $3 million.

Our partnership with Eigen began in 2014, and to date, we’ve invested over $1.5 million. An investment of that size doesn’t happen by accident. Since our first investment four years ago, the company has increased its revenue and grown its team from 2 to over 30 employees. Impressively, they’ve also secured some very high-profile customers, including some of the world’s largest automotive manufacturers.

“Those customers see the value that this New Brunswick start-up can bring, and that brings more investment and expertise,” says Thomas Bird, NBIF Investment Associate. “We can build on that here and be a part of that story. That’s something we’re interested in pursuing.”

For every investment, we have a “checklist” that helps us determine whether we’re likely to receive a sound return from our financial support. Eigen has been able to consistently hit critical milestones, grow their revenue, and grow their customer base. To put it simply, Eigen was an easy investment for us – year after year after year.

“Having Eigen consistently able to grow and reach their goals has strengthened our relationship with them,” says Thomas.

Eigen is helmed by Scott Everett, the company’s co-founder and CEO. Scott has an impressive background, with a master’s degree in Mechanical Engineering, which has undoubtedly served him well in his current role. The company has roots at the University of New Brunswick, and we’re pleased to see that as it has grown, the Eigen team continues to work with UNB researchers.

“New Brunswick has been, and always will be, an important part of our company’s story,” says Scott. “We’re excited about the growth we’ve achieved, and for what’s to come. We’re grateful to NBIF for their continued support and belief in our potential.”